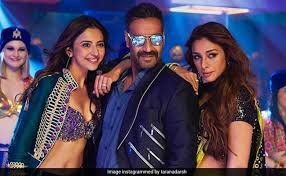 The latest offering from Ajay Devgn would be his film De De Pyaar De. The film has Tabu and Rakul Preet in the lead roles, which is hitting the screen tomorrow. The makers have pulled the date of release from 17th May to 16th May to get an extended weekend. The film has an interesting story having a fifty-year-old man played by Ajay Devgn, who is in love with a girl of half of his age. The film is made at the backdrop of London and the trailer of the film has created a decent buzz in the media.

Going through the track record of the Ajay Devgn films, he enjoys some decent releases with collections mostly going beyond 100 Crores including Total Dhamaal, Raid, and Shivaay, while Golmaal Again crossed two crore mark. Even his film Baadshaho that remained low in terms of reviews and ratings did a decent job at the box office closing 80 crores at the box office. Thus his upcoming film De De Pyaar De has a fair amount of chance to do a decent business.

Also, the film is a solo release and it has a decent buzz ever since the quirky trailer was released in the media. The romantic comedy by Akiv Ali is likely to do better at the box office and one can expect the collection from 6 to 8 crores at the box office, while with the extended weekend the film is likely to reach to close 40 crores. However, it may have some competition posed by the Student Of the Year 2, but it has the potential to deal with it. Let’s see how things would move but at the moment things are not rosy.