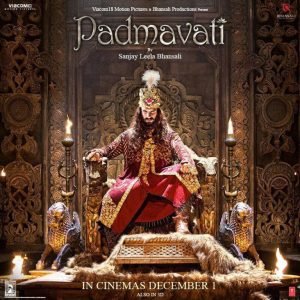 Sanjay Leela Bhansali’s upcoming majestic period-drama ‘Padmavati’ is buzzing with various juicy news updates. The movie has freshly released its song “Ek Dil Ek Jaan” featuring Deepika Padukone and Shahid Kapoor and now, the makers have unveiled a new poster of the film. This poster shows Ranveer Singh owns the golden throne as the dreaded ruler Sultan Alauddin Khilji, as he seats in the lap of grandeur and luxury. The actor looks super villainous and his avatar sends chills down the spine. By looking at the menacing look of the actor, it can be said as his best performance so far.

Ranveer reflects the devil inside his character in this poster and he portrays a troublemaker king, who brings storm in the lives of Rani Padmini (Deepika Padukone) and Maharawal Ratan Singh (Shahid Kapoor). The riveting trailer of the film did not show any dialogue by Ranveer’s character but hid dark character does all the talk.

The buzz revealed that Ranveer Singh was so much in his character of Khilji that some of his friends suggested to go to a psychiatrist to come out of the negativity of this character and live a normal life.

The film ‘Padmavati’ is grabbing attentions with the aristocratic sets and the royal attires of the lead characters. Bhansali’s earlier period-drama ‘Bajirao Mastani’ too had some majestic sets and regal costumes alluring the viewers. ‘Bajirao Mastani’ feaured Ranveer Singh and Deepika Padukone in the lead roles and now, the actors will share the screen once again in the period-drama ‘Padmavati’. Deepika Padukone will enchant the audience with her heavyweight royal outfits with intricate handwork and the actress looks breathtaking as Rani Padmini.

Helmed by Sanjay Leela Bhansali, the movie ‘Padmavati’ hits the screens on December 1.