Shah Rukh Khan, also known as “The King of Bollywood,” recently made an appearance in Dubai at the Burj Khalifa, the tallest building in the world. The event was part of the promotion for his latest film, “Pathan,” which is set to release on 25th Jan 2023.

SRK, as he is commonly known, arrived in Dubai on a private jet and was greeted by a large crowd of fans at the airport. He then went to the Burj Khalifa, where a spectacular light and sound show welcomed him. The building’s façade was illuminated with images and messages promoting the film while the crowd cheered and took pictures. During his stay in Dubai, SRK also visited the Dubai Fountain, located at the Burj Khalifa base. He took a boat ride on the fountain, enjoying the spectacular water and light show. He also had the opportunity to meet with some of his fans and take pictures with them. 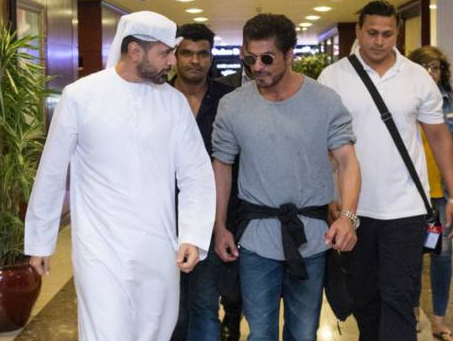 SRK’s visit to Dubai was a huge success and created a lot of buzz on social media. Fans shared pictures and videos of their encounters with the Bollywood superstar and expressed their excitement at meeting him in person. The Burj Khalifa, which stands 828 meters tall, is not only the tallest building in the world but also a significant landmark of Dubai, and SRK’s presence at the iconic tower added more charm to his visit. The tower also provides an incredible view of the city and is a popular tourist attraction. So, SRK’s visit to Dubai at the Burj Khalifa was a memorable event for his fans and a great promotion for his upcoming film “Pathan”. The presence of the Bollywood Superstar and the spectacular light and sound show at the Burj Khalifa added more excitement to the event, and SRK’s visit created a lot of buzz on social media. The Burj Khalifa, a significant landmark of Dubai, was the perfect location for SRK to make an appearance, and it will remain etched in the minds of his fans forever.

How Sidharth Malhotra Celebrated his Birthday on the sets of Indian Police Force? Check Details