Bollywood baadshah Shah Rukh Khan has won the hearts all over the globe with his excellent acting skills and extremely charming personality. This king of romance is still ruling the world of cinema and has proved that age is just a number for him. Apart from his very glitzy filmy career, Shah Rukh is a doting dad to his three children, Aryan, Suhana and AbRam.

Aryan and Suhana are all grown up now and they make paparazzi follow them due to their stylish, smart personality. The star kids enjoy a big fan following and make the heads turn with their fashion statement. The little AbRam grabs attention with his adorable looks and many times, the kid is spotted on father Shah Rukh’s film sets.

SRK shared a black and white collage of his three children and wrote “My three vices in pictures: Grace, Style & Playfulness.” 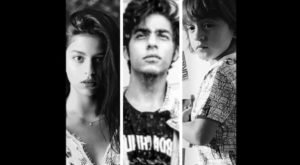 Shah Rukh was last seen in the film ‘Jab Harry Met Sejal’ in which he shared the screen with Anushka Sharma. On work front, King Khan will next feature in Aanand L Rai’s forthcoming film and the actor portrays the role of a dwarf in this flick. Anushka Sharma and Katrina Kaif are the lead ladies of this film and it also has cameo roles by some A-list stars. Prior to this, Shah Rukh Khan, Katrina Kaif and Anushka Sharma together featured in the blockbuster flick ‘Jab Tak Hai Jaan’.

The movie will have an extensive use of VFX, as showing Shah Rukh in his role of a vertically challenged person is a challenging job.