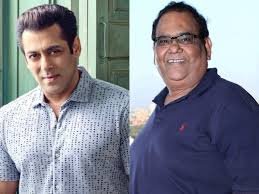 The actor Salman Khan has been associated with veteran actor Satish Kaushik in many of the films including Tere Naam when they worked as an actor and director Jodi. They have also seen in the other films as well including the recently released film Bahrat. Now, we hear that the Tiger Zinda Hai actor has tied up for his next film called Kaagaz where Satish Kaushik would be directing the same with Pankaj Tripathi in the lead role.

When Salman Khan heard the story of the film he took no delay in saying yes to the project. Satish has just asked him if is willing to be with him in his next film. It was Tere Naam when we saw Satish Kaushik directing the film with Salman Khan as the lead star in it. Now, when he is back in B Town with Kagaz as a director, we would see Salman Khan presenting his film to the audience. So, Salman Khan would be producing the film under his own banner Salman Khan Films’.

Talking about the movie, Satish said that it is a modern day film with young actors to be the part of it along with Pankaj Tripathi in the lead role. The content would be rich and the director seems to be excited about working with Pankaj Tripathi who has worked in a number of movies and proved his niche. Talking about the sequel of Tere Naam, he said he has something in his mind but would disclose later as to how he would develop the things. Stay tuned to know more about it and others only with us.

This is how Bipasha Basu looks without makeup, shared photos on social media