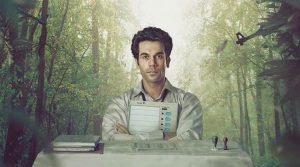 Rajkummar Rao starrer ‘Newton’ is India’s official entry at the Academy Awards 2018 under the foreign language film category to be screened at the American Film Institute Festival 2017. The film has been selected for the World Cinema section of this festival. ‘Newton’ directed by Amit Masurkar features Rajkummar Rao, Anjali Patil, Pankaj Tripathy and Raghubir Yadav. The Los Angeles premier of this flick was marked by this screening.

‘Newton’ hit the screens in November and the 67th Berlin International Film Festival 2017 observed its world premiere this year. At the 41st Hong Kong Film Festival 2017, the movie ‘Newton’ grabbed the Jury Prize for Best Film. 92 nations have submitted movies for consideration in the category of Foreign Language Film for the 90th Academy Awards and ‘Newton’ is among that list.

About this, the director Masurkar said “It’s a great honour to screen our film here at the AFI FEST. What’s great about this festival is that it is absolutely free for the audience,”

‘Newton’ is a narrative of a rookie government clerk who has to go on an election duty to a conflict-ridden town controlled by Maoist. An awkward situation is created by this ideological struggle. Newton makes his best attempt to conduct a fair voting process despite all the odds. The shooting of the film took place in Chattisgarh and it was Drishyam Films production. Packed with excellent character performances, ‘Newton’ performed decent at the box-office. It had to confront the controversy of being copied from ‘Secret Ballot’, an Iranian movie.

Apart from this, Rajkummar Rao has recently appeared in the movies like ‘Trapped’, ‘Behen Hogi Teri’, ‘Bareilly Ki Barfi’ and ‘Shaadi Mein Zaroor Aana’ is running in the theatres at present.

Kanisha Malhotra to star along Aarya Babbar in Bohra Sisters