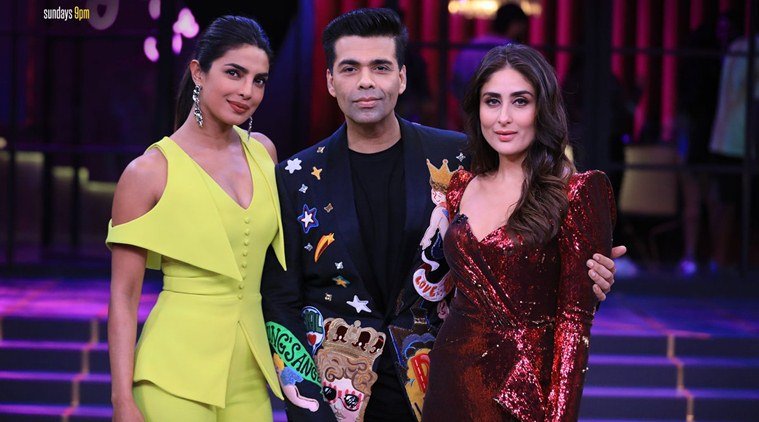 Chat show Koffee with Karan is a platform where celebrities always discuss their major career milestones and disclosing some personal things.

Recently show host siblings Janhvi Kapoor and Arjun Kapoor and cricketers KL Rahul and Hardik Pandya that were followed by a lot of buzz on social networking sites.

The show now reveals season 6 with actors Kareena Kapoor and Priyanka Chopra, to be aired this Sunday.

The duo veteran actors are trying to balance their personal and professional life.

Interesting both the actors have dated Shahid Kapoor in the past and are now happily married and are doing well in their respective careers.

Keeping in view their history in which both actors have achieved milestones due to which a lot of fireworks are expected in the finale episode,

Reportedly in the show, Karan asked Priyanka if she was now a Jonas, to which the actor agreed blushingly. She revealed that soon after she tied the knot with Nick at Jodhpur’s Umaid Bhawan Palace in December last year, he asked her what her name was. When she replied “Priyanka Chopra Jonas,” he nodded saying, “I see… I see…” but enquired further, “And on Insta?” She said that was when she decided to change the name on social media as well.

Pertinently the channel has already released a few promos from the upcoming episode.

In one of the promos, Karan could be seen asking Priyanka the one millennial habit in which she could beat an 18 year old. Priyanka replies, “Moving on.”

During the chat  priyanka said, she wasn’t aware who Varun Dhawan is dating, to which Kareena replied, “What do you mean you don’t know who Varun is dating? So now you only know Hollywood actors or what? You are making us sound like ‘Kaun hai woh?’ Don’t forget your roots haan!”