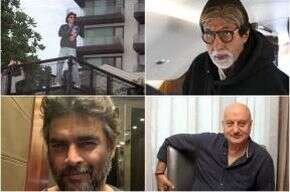 Like many of the celebrities in the country, we also noticed the B Town celebrities reacting on this Mission of the Indian space agency called ISRO. Let’s see who said what on the social media sites as under:

Amitabh Bachchan – The Big B was first to react on it on Twitter when he said Pride is never defeated, we are proud of you ISRO. He then added a stanza of his father’s poem in an image with Chandrayaan 2 picture.

Shah Rukh Khan – While tweeting about the ISRO’s attempt, King Khan said taking off for any mission is important than reaching at the destination one wants. He said that he is still proud of ISRO for their efforts.

Divya Dutta – She was quick to share her views on Twitter boosting up the morale of the ISRO people who led this mission in a poetic phrase.

Riteish Deshmukh – The comedy actor is quick to share anything whenever he has the reason to tweet. He said that we should over come and the future belongs to us as we believe in our dreams. He then shared the photo catching up the glimpse of Chandrayaan 2 with his wife on his phone.

R Madhavan – The Rang De Basanti actor also commented on the same calling the mission still very successful despite losing the path just before 2 kms from the moon’s surface. He said since it is still completely functional, hence the mission can be still called as very much successful. Interestingly he is doing a film on space drama called Rocketry: The Nambi Effect.

Anupam Kher – He also the boosted the morale of ISRO by quoting a phrase – girte hai sai sawar maidaan e jang me and then said proud of you ISRO.

Madhur Bhandarkar – The reality based filmmaker also boosted the morale and congratulated them on this field despite failing.